There are eight men named on the WWI War Memorial plaque recovered by the Marple Website from the Albert Schools in 2019 and now restored and on display in Marple URC Church on Hibbert Lane. 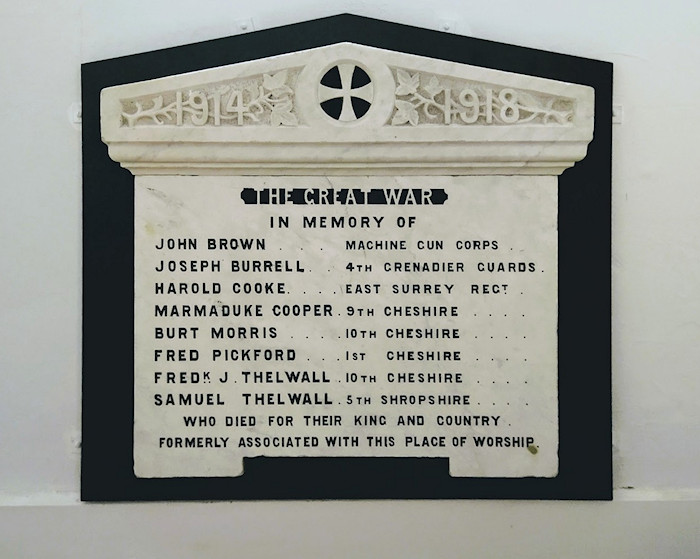 Seven of the men have well established local connections and are commemorated on the Cenotaph in Marple Memorial Park but the inclusion of Marmaduke Cooper was at first less clear. With the help of Marple Local History Society and "Lest We Forget" Hollingworth we now have a much better understanding of how Marmaduke came to be named on this recently rediscovered War Memorial.

What links these eight men together?

The War Memorial was orginally located in the Union Rooms Mission Church, and that is the location referred to in the last sentence of the enscription: "Formerly associated with this place of worship". We know this because there is a record of the War Memorial being added to a list assets transferred from the Union Rooms to the Albert Schools when the former was closed and sold in 1931.

Below are the cards from the WWI Timeline in Marple Memorial Park for the seven Marple men featured on the Cenotaph in the park, plus additional material about Marmaduke Cooper provided by "Lest We Forget" Hollingworth and orginally researched by author Tony Catchpole for his book "A Simple Cross of Cornish Granite" that helps to explain his inclusion on the Memorial too. 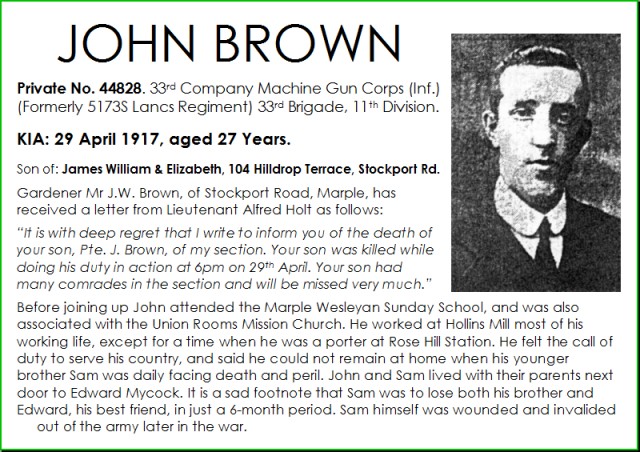 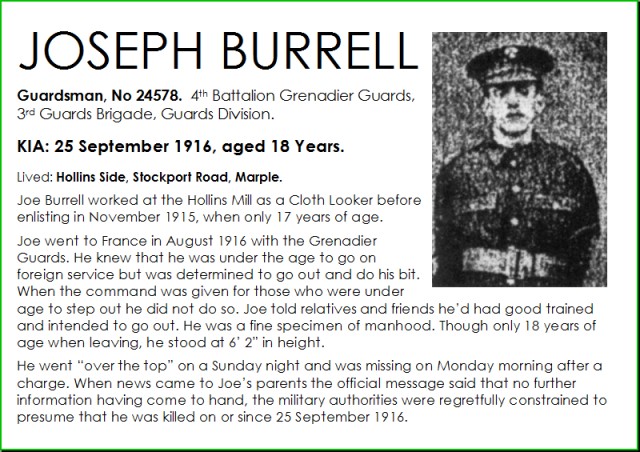 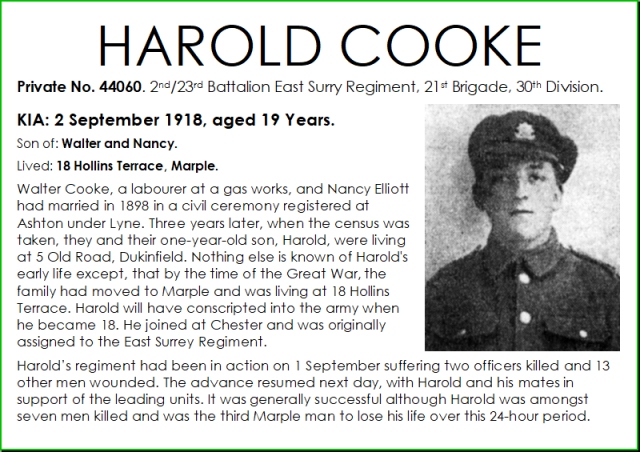 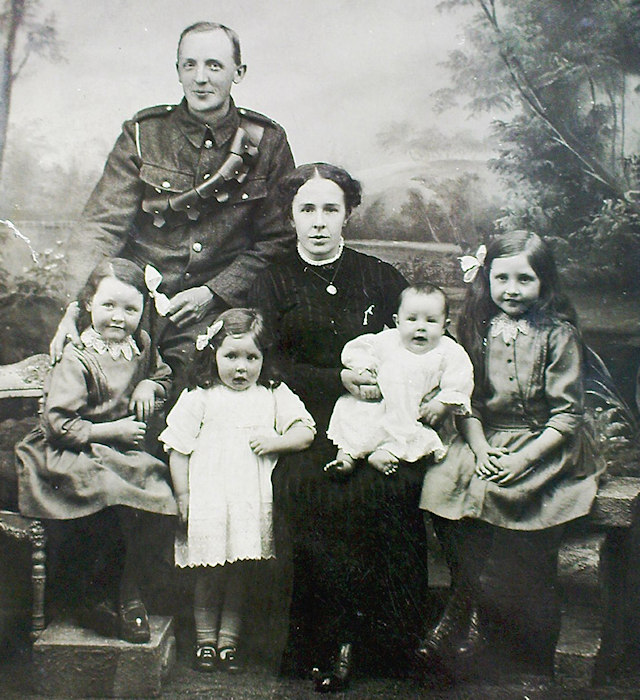 One of five children of Joseph and Elizabeth Cooper, three of whom died in infancy, Marmaduke Cooper was born on December 8th, 1882, at Mottram Moor, Hollingworth. He was baptised at Hollingworth United Methodist Church on January 7th, 1883. In 1887, in a school roll, his address was given as 14, Well Row. He attended Hollingworth British School and Newton Moor Church of England School.

Marmaduke married Lizzie Moores on June 9th, 1906 at Bethel Methodist Church, Stalybridge. Marmaduke’s life had changed considerably by 1911. The census shows that he, his wife Lizzie and two daughters Doris and Olive Mary, were living at 37 Prestbury Road, Macclesfield and Marmaduke was an Assistant Superintendent, Life Assurance, for the Prudential Insurance company.

Olive Mary is recorded as being born in Marple on 27 January 1909, so the family must have lived here for a period sometime either side of Olive's birth. It must have been during this period that Marmaduke, and presumably the family too, became associated with the Union Rooms Mission Church.

It is interesting that even though their stay in Marple can only have been for a few years prior to 1911, Marmaduke was well enough remembered to be included on the Union Rooms Mission Church war memorial after the end of the war in 1918.

Marmaduke and Lizzie went on to have two more children, Dorothy Margaret in 1913, place of birth not recorded, and Clifford Moores, recorded as being born in Stockport in 1915. So even after 1911 the family's movements are not completely clear.

Marmaduke enlisted at Chester in August 1915 aged 32, first joining the Cheshire Yeomanry as Private 1812, then 5522. The address he gave was 79 Market Street, Hollingworth. In December 1916 he became Private 50238, 9th Battalion Cheshire Regiment. On enlistment, Marmaduke stood 5ft 9ins tall and had a chest measurement of 36 inches.

Private Cooper was reported missing, presumed killed in action, aged 35 on March 25th, 1918. He was awarded the British War and Victory medals.

His widow, on enquiring if there was a scheme to assist her to visit the grave without too much expense, was advised to contact the Salvation Army. She was awarded 33s 9d per week (about £1.70) for herself and her four children. Marmaduke had made a Will in November 1911, and bequeathed everything he had to his wife. 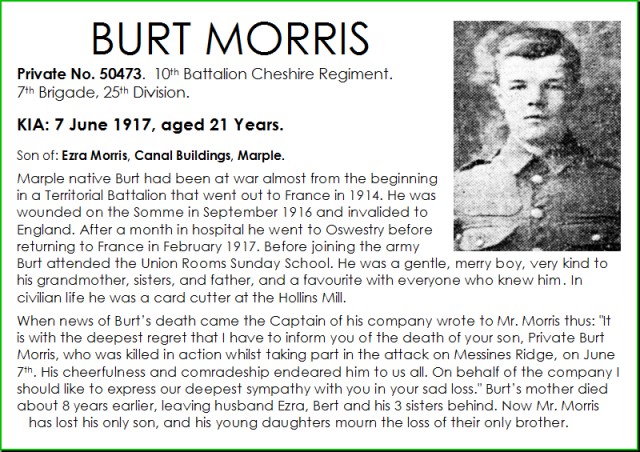 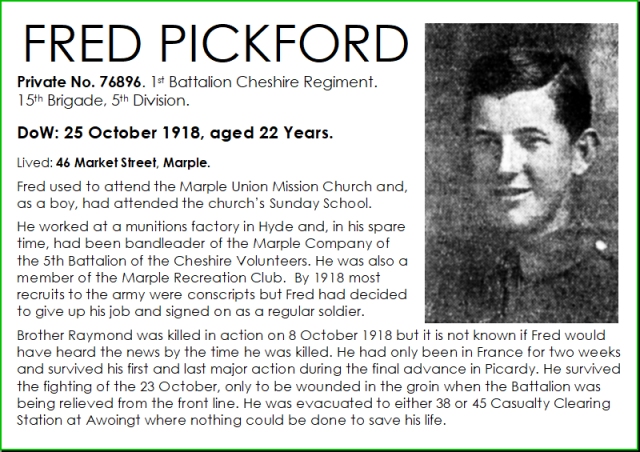 Note: Fred's brother Raymond (age 24 when killed 8/10/18) was a member of Marple Band, attended Albert Day School as a boy and All Saints' Sunday School. 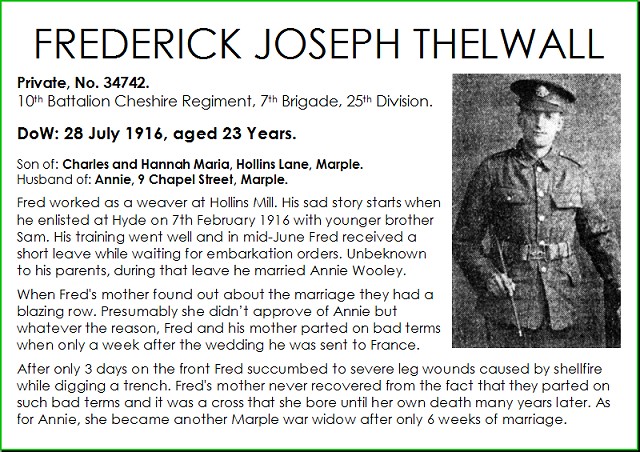 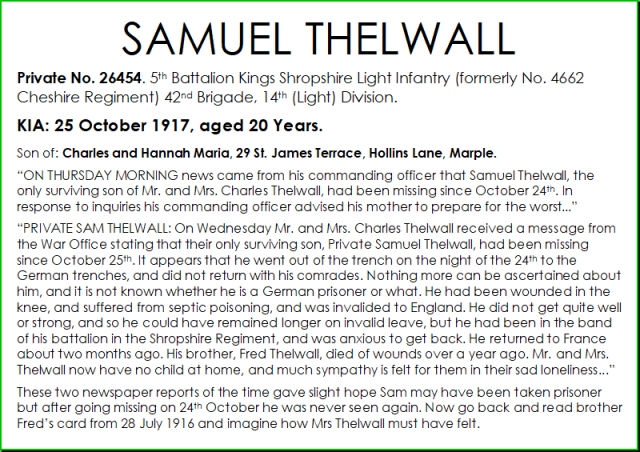 The Book: “REMEMBERED – Marple Men who fell in The Great War” by P Clarke, A Cook and J Bintliff. This book and the research behind it carried out by the authors is a key source for the cards about the Marple men and would not have been possible without their efforts. Unfortunately the book is out of print but there are reference copies available at Marple Library.

"Lest We Forget" Hollingworth for information provided about Marmaduke Cooper's life story and Tony Catchpole for all his hard work and research for "A Simple Cross of Cornish Granite", his book about the men on Hollingworth's War Memorial, on which Marmaduke's information was based.