Many local people will not be aware that there's been a BMX / Mountain Bike Track in Brabyns Park since 2004. It looks like this won't be a secret for much longer, as a new group headed up by local resident Oli Lougheed are intent on putting the old track back on the map.

The track originally cost £26,000 and was finally finished in the summer of 2004. Young bikers had campaigned for more than a year to get it built, only to see it washed away by devasting floods just four months after Stockport Council opened it. The flooding was so bad that some people thought the track had been damaged beyond repair but the teenagers - known as the Biker Crew - worked with the council to repair the damage and reopen the track in 2005, following the December flooding.

Today, although suffering quite badly from wear and tear and the tendancy for flooding in this area of the park, the track remains usable in dry weather, as this video from Withington Cycles shows.

In December 2020 Oli set-up a new Facebook Group to support improvements to the Brabyns bike track, establish a sustainable group to promote cycling in the park for all levels and plan events in the park too. After a slow start through the winter months, interest in the project from the local community is now gaining traction. Oli has new volunteers onboard, including Peter Young from Pedal Power Marple, and John Thorpe from Famer John's MTB Park. 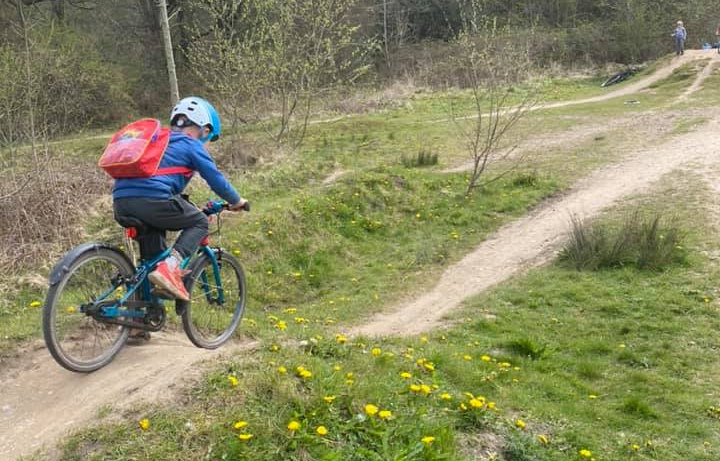 Brabyns Bike Track in the Spring of 2021

In May 2021 Oli has held meetings with Friends of Brabyns Park, Friends of Memorial Park and councillor Malcolm Allan, who are all keen to support the group getting properly established with Stockport Council so that they can bring their plans and ideas for improving the Bike Track to fruition.

How you can help?

To find out more and to get involved, head over to the Facebook Group: Brabyns Bike Track.

As well as volunteering, Oli says "one of the easy ways you can help is by posting photos to the Group page showing the track being used - so we can start to demonstrate its popularity".

Also, look out for more news of a fund-raising day scheduled for 24 July - details TBC.