These two wonderful scrapbooks were complied by Flora Buck while she worked as a Red Cross Nurse at the Brabyns Auxiliary Military Hospital from October 1914 until May 1919.

Flora utilised old catalogues of the time as the base for her scrapbooks to conserve paper and you will see adverts for all kinds of domestic products peeking through on some pages. The scrapbooks contain newspaper cuttings, photographs and postcards that tell of the events that Flora and the rest of Marple found themselves caught up in during the Great War. 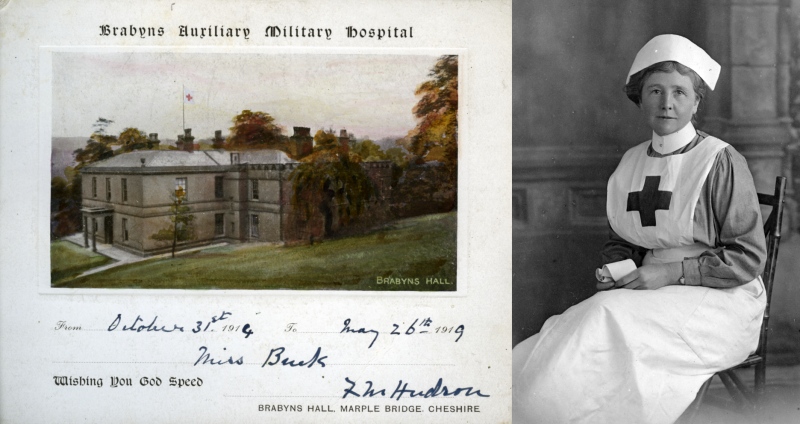 The content of the scapbooks will be fascinating to anyone interested in Marple's history during this period. The frequency and detail of the regular reports in local newspapers is quite amazing and it was clearly the social media platform of its time in a way that is not always appreciated today.

The regular reports, usually written by local Red Cross Hon. Secretary Gertrude Fox of Springfield House, chart the arrival and departure of every sick or wounded soldier. They record the trials and tribulations of the hospital and the generosity and support of the local community in finite detail. Every donation and contribution seems to be acknowledged, from the substatial cash contributions of Frank Barlow to the organisation of entertainment for the patients, from the regular supply of cigarettes, games and every kind of provision, down to the donation of a pototao peeler.

The scrapbooks are uploaded as pdf documents. Files are quite large so that visitors can read the newsprint - around 55Mb each. You may need a broadband connection to download and they will be easier to read on a desktop screen than a phone. Click links or images below to open.

About Flora Buck and her scrapbooks

Flora was the daughter of William Buck of Field House, Marple, and cousin of John Stanhope Collings-Wells VC DCSO, who lived with his Uncle Will from 1906 until the outbreak of war in 1914. Flora's brother George F Buck was Hon. Secretary of Brabyns Military Hospital during the early years too.

The scrapbooks were kept by Flora's family until Dr J A Collings-Wells of of Lymington, Hampshire, decided that they were more important to Marple's history that his own, and he gave them on loan to Andy Cook, one of the authors of "REMEMBERED Marple Men who fell in The Great War". Andy in turn offered the scrapbooks on loan to Marple Library but due to their fragile state only photocopies were made available for the public to handle in the library's heritage section.

In 2020 the Collings-Wells family asked Andy to return the scrapbooks to them. Before complying with this request the originals were released from Marple Local History Society's archives to be carefully photographed and scanned by Mark Whittaker of the Marple Website to ensure that digital copies of Flora's scrapbooks remain available to the Marple Community after their return to her family. 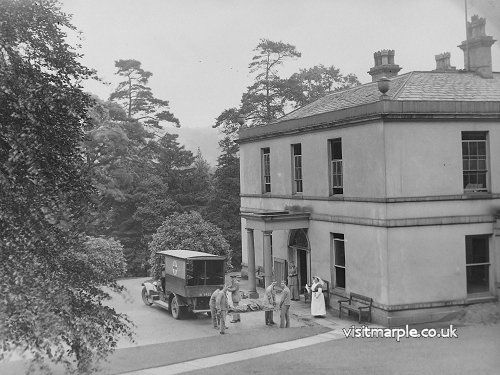 It's hard to summarise the story of Brabyns Military Hospital told by Flora's wonderful scrapbooks in a few paragraphs, however, this article she cut and pasted from the 17 March 1917 issue of one of the local newspapers goes a long way towards providing a potted history written at the time. It also gives a great insight to how the community felt about the hospital located in their midst.

Brabyns Military Hospital: THE WORK IT HAS DONE

Mr. Alfred Hirst, Chairman of the Marple Urban District Council, presided at a concert given on behalf of the funds of Brabyns Hospital in Trinity Hall, on Wednesday night, and made a statement dealing with the work of the institution since Miss Hudson set her home aside for the purpose.

Mr. Hirst explained at the outset regarding the concert, that whatever was realised would be handed intact to the Hospital. He was quite sure they would agree with him that there was no more worthy object. Next to fighting, surely the tending of the wounded and sick was the most important matter which could engage their energies, sympathy and skill: in a sense such work was even more important than fighting, and they were all proud of Brabyns Hospital, regarding which he should like to give them some facts furnished to him by Miss Fox, the indefatigable secretary.

On August 4th, 1914 (continued the speaker), Miss Hudson, in a very generous and noble-hearted way, offered, through the Red Cross Society, her home and 12 beds for a Hospital, the offer being accepted on September 1st, and the first patients arriving on Oct. 31st. In November of the same year the beds were increased to 22; in October, 1915, to 30; and in July of last year to 45, tents also being erected on the lawn for the accommodation of some of the wounded soldiers. 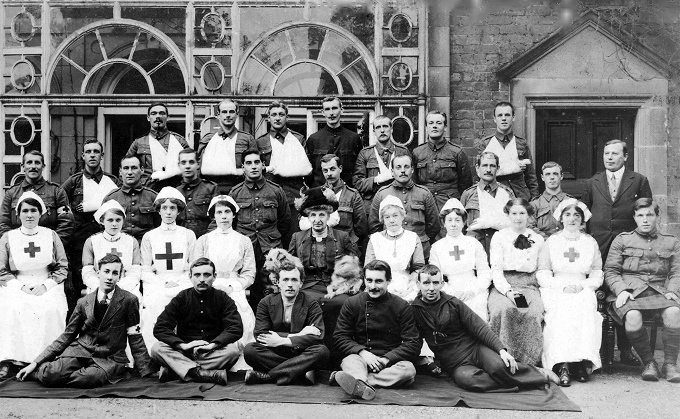 In October last year (1916) "Benaire" house in Station-road was rented as an Annexe to the Hospital; and he would like to say that a very generous Marple gentleman, Mr. Frank Barlow, was paying the rent of that house, whilst, also meeting the expenses beyond what the Government allowed for each patient. He thought that was very generous and noble.

Recently the total number of beds had been increased from 45 to 56, and if the necessity arose they could be increased even to 60 (and from what they were reading in the newspapers he was afraid the necessity would arise for the larger number).

Some soldiers, as they all knew, had stayed at Brabyns for months, and had been very comfortable there. He recognised some he met at a seaside town, and in speaking with them he found that they all said they would like to be back. Each patient cost 3s. 2d. per day inclusive of everything: food, drugs, clothing, light and heating; and the Government grant up to February was 2s., whilst now it was 2s. 6d. The Hospital was regularly inspected, and the reports had been always good.

Mr. Hirst next gave particulars of the staff, mentioning that Miss Hudson was in charge, and that the medical officer was Dr. Burton, assisted by Dr. Storey. — (Applause.) 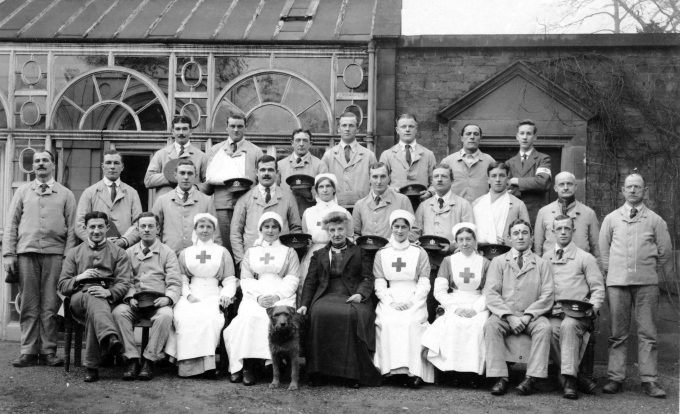 During the first winter the soldiers had been entertained by a committee consisting of Mr. Laird, Mr. Walter Barratt and Mr. Baird, and the tedium of staying in the institution had been relieved by the excellent concerts and other entertainments that these gentlemen had provided.

About £15 per week was required in donations for Brabyns, and the fact that the Hospital had been kept running by means of the donations of the people testified to the generosity that Marple and the district had shown. In January of this year the Funds were rather low, but through an appeal made to the public, the situation improved. The point he wished to emphasise, however, was that Brabyns was constantly in need of money, and, in consequence, concerts such as the one to be given that evening, were most acceptable.

387 Patients had been treated at Brabyns since October 1914. The Chairman of the Council concluded in a very practical way. Buttonholing his audience, so to say, and speaking to the people in a kindly and gentle yet urgent voice, he said “Do your best for Brabyns, ladies and gentlemen; it is an institution we are all proud of.” — (Applause.) 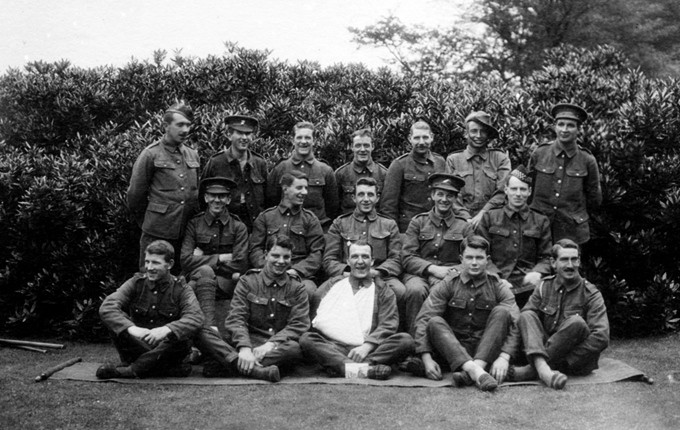 Happy soldiers on the road to recovery at Brabyns Military Hospital

During an interval in the singing the Rev H. Hayes made a speech. He announced that the takings were £26 — (Applause.) Then there had been donations from the patrons and the Chairman, which would increase the sum to £33 7s. He was grateful for such a result from their effort, and if they could augment the amount to £40 he would be the more pleased. Mr. Haynes thanked Mr. Hirst for his aid, and said in regard to his friend Mr. Bourne, his help has been most valuable.

It is well worthy of note that a party of about 25 of the patients at Brabyns were entertained to tea in a room adjoining the concert hall by a committee of ladies belonging to the congregation, consisting of Mrs. Bagshawe and Mrs. Burdass, as the chief promoters, and Mrs. Dawson, Mrs. Tymm, and Mrs. Bradshaw as their helpers. The ladies defrayed the entire cost. Before the tea the soldiers spent a merry hour or two in singing and Miss Hambleton played for them. The ladies were heartily thanked by their guests for their treat.

But the story doesn't end there

The article above give a snapshot in time but hostilities continued for almost two more years and Brabyns Military Hospital didn't close until May 1919. In that period the annex for the extra 15 beds at "Benavie" was closed but a new annex was opened at Rose Hill House in April 1918, providing a further 25 beds and taking the total occupied beds to 60 in that month.

Although Flora's service card suggests she was there until the bitter end, her second scrapbook seems to dry up around the time that Rose Hill was opened and jumps to undated cuttings around the time of the official closure. These mention 760 patients passing through the hospital since October 1914 but it is not clear if these are final figures. What is certain is the incredible sacrifice made by Miss Hudson and her team, and the toll on her can be seen in this late photo, where she seems to have aged far more than the 4 years that had passed since the war began. 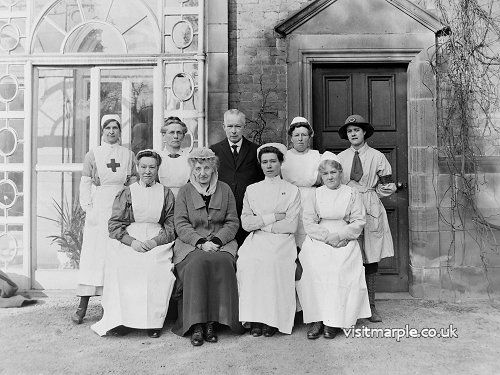 Miss Hudson and staff, thought to be taken during the final days

Recognition of Miss Hudson's sacrifice and the community's effort

In the list of "Officers of the Order of the British Empire" in the supplement of the "London" Gazette," the name of Miss Hudson appears for services rendered in connection with the war. This honour is greatly appreciated by herself and by the hospital staff, both nursing and domestic; also by the Marple Red Cross Committee, as a public recognition of what Marple and the neighbourhood has been able to do for the wounded and sick in this war. Katharine, Duchess of Westminster puts it so kindly and in such an understanding way in writing to Miss Hudson:

I hardly like to congratulate you upon the honour that has been bestowed upon you, as I know that the voluntary work you have done cannot be rewarded in that way; but I hope you will look upon it as a mark of appreciation for what your hospital and staff have been able to do to relieve much pain and suffering during these sad years of war."