Memories of Marple with Fred Winterbottom 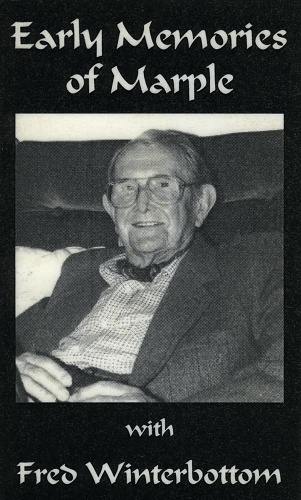 Fred Winterbottom talking about his memories of Marple in 1996

This is a video from Marple Local History Society's archives of Fred Winterbottom talking about his early memories of Marple. It was recorded in 1996 by Gordon Mills and was converted from VHS tape to digital format by The Marple Website in November 2011. In January 2020 it has been uploaded to Youtube and migrated to the new website.

Fred was born in Marple on Union Road in 1907 and remembers some incredible things, including attending the auction of Marple Hall contents in 1929 and everyone jumping to attention when the squire of the hall came into the newsagents to pay for the papers! He tells why Miss Fanny Hudson of Brabyns Hall never married and how she would pay the local butcher to distribute meat to poor families and turned the hall into a hospital for the wounded during the First World War.

Fred recalls going to the Albert Schools, childhood adventures in the ruins of Mellor Mill, playing cricket for Hawk Green and Compstall, Lacrosse for Marple and Mellor and talks about people he considered to be local heroes. He describes how Marple has changed over the years, including Market Street, the Gems Cinema and the area around Hibbert Lane. He also describes Rose Hill Station, Stone Row Cottages, Jinks Boat Yard, Marple Baths, Hollins Mill and the Goyt Mill and how people used to get around before everyone had cars.