Old Boys who answered their country's call during the War 1914 -

A fascinating glass slide recently came into Marple Local History Society's archives with a group of other, seemingly unrelated, photographic images from the early 1900s. It's a study of a Roll of Honour document that must have been a "work in progress" when the photograph was taken. 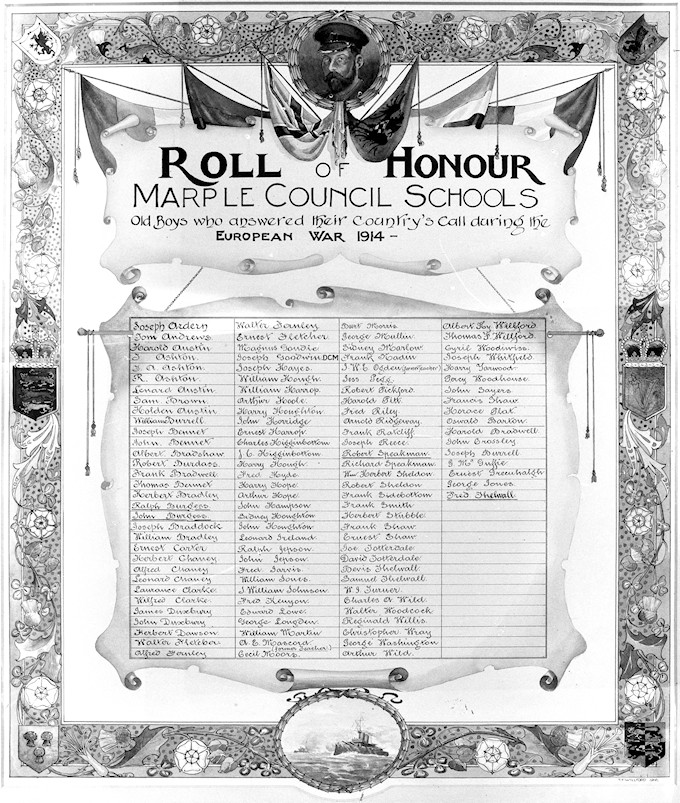 Whether the original document still exists is currently unknown but it would be wonderful to track it down in an archive somewhere to see if it was ever finished and how it looks today.

Why is this Roll of Honour unusual?

Commonly Rolls of Honour like this usually list those from a particular area, group or club who fell during the conflict. This one is quite unusual because it lists all those who answered the call and includes men known to have survived the war too. The photo is even more unusual as it depicts an unfinished document at a particular point in time, almost certainly while the war was ongoing.

We know much less today about the men who survived

It is relatively simple to find information about soldiers who died during the Great War today. The Commonweath War Graves Commission keeps on-line records that are easy to access. Of course in Marple's case, we also have the fruits of extensive research done by the authors of the book "Remembered: Marple Men who fell in The Great War" and the WWI Timeline in Memorial Park. So we can readily find information about the men on this Roll of Honour who died during the conflict.

There are paid options such as Ancestory.co.uk and Findmypast.co.uk where it may be possible to find service records of men who survived. However, service records alone won't tell us what happened next for these local men who managed to survive the war and come home. Finding out that kind of information could become a lifetime's work for a single researcher!

How can local people help complete the picture?

It is hoped that by putting this information in the public domain for people to discover, it will enable decendants of these men to tell a little bit about their ongoing stories. Did they come back and marry their local sweet-heart? Did they have lots of children and grandchildren? Or maybe they struggled to get over their experiences and the outcome was much sadder?

So if you find a relative on this Roll of Honour and you would like to share some information about what happened to them please get in touch via the contact page.

Here's the list of names and what we currently know: 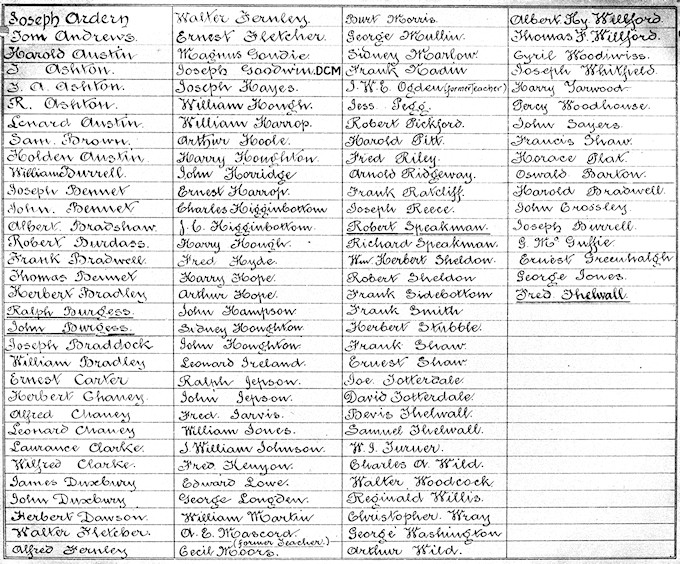 Roll of Honor names only - click for a larger version

Table of names and what we know:

This table is a work in progress too.

Additional details, links and snippets will be added as more information is discovered.

Four names are underlined. It is likely these men were known by the writer to have been killed. We can't be certain of that as the date of death on some others are earlier than those underlined but at the time deaths were not always immediately known. Sometimes men would be recorded as missing for a long time before their fate was confirmed to the local community.

In a few cases it is uncertain if the handwriting has been interpreted correctly.

The letters DCM look like they have been added after Joe Goodwin's name was originally included on the Roll of Honour. As Joe was awarded the DCM for his actions taking place on 12 March 1916, we can be sure that the photo was taken some time after this date.