The following description is an extract from "East Cheshire Past and Present" by J.P. Earwaker M.A., F.S.A. published in 1880.

Marple Hall, for many generations the residence of the Bradshawes, is picturesquely situated on somewhat high ground, having a very precipitous descent at the back to the meadows and woods, through which flows the river Goyt. Its general appearance from the front is shown in the plate opposite page 61 (below). 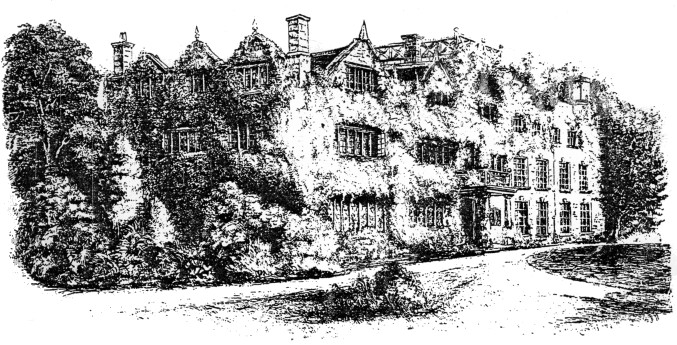 One end of the Hall has pointed gables and long, somewhat narrow windows, with stone mullions, and was probably erected about 1658, when Henry Bradshawe, the brother of Lord President Bradshawe, having succeeded his father, rebuilt the greater part of the Hall. The other side, with its lofty windows, apparently dates from the time of Queen Anne - the beginning of the last century. At the back of the building , over one of the doors, is the date 1658. In one of the upper rooms there is still left a gable with black and white work, which marks where the front of the old Hall stood, and shows that it was enlarged at the same time that it was rebuilt. There is nothing to mark the antiquity of the older building, which was probably merely a tenant farmer's house in the ordinary Cheshire style. The entrance-hall, which is low and somewhat dark, contains some specimens of armour, old weapons, &c. The library, leading out of the hall, has small shields of arms painted on the sides of the room, and contains a few family portraits. The dining-room has handsome oak furniture, and several old pictures which appear to have come from the Arderne sale. The oak staircase is hung with with portraits, views, plans, &c., and in one corner is a good example of the spinning-wheel in use in the last century. The ante-room, leading to the drawing room, is oak panelled, with small painted shields of arms, and has a stone fireplace with the Bradshawe arms and the date 1665. The drawing-room, which is reached by a small flight of steps, is hung with two fine pieces of old French tapestry, representing Diana and her Nymphs and Time and Pleasure, and having a crown and the letters LL interwoven into it. There are also here three pieces of sculpture after Thorwaldsen. In one of the bedrooms is an old oak bedstead which came from Wibersley Hall, and in another an oak bedstead, on which is carved in bold capital letters on the outside, " He that is unmerciful, mercy shall miss: but he shall have mercy that merciful is." And on the inside, "Love God, not gold: Sleep not until U consider how U have spent the time: if well, thank God; if not, repent." On two panels on either side of the fireplace in this bedroom are painted these mottoes : ~

"Though thou be for thy pedigree as ancient as Satan, in wisdom as wise as Solomon, in power as mighty as Alexander, in wealth as rich as Croesus, or for thy beauty as Flora, yet if thou be careless of religion and of thy God, thou art a wretch most vile and miserable."

"My Son, hear the instruction of thy Father and forsake not the law of thy Mother, they shall be an ornament of grace unto thy head and chains about thy neck. Long life and peace shall they add to thee. Remember, true wisdom is the principal thing and a good conscience the best estate." 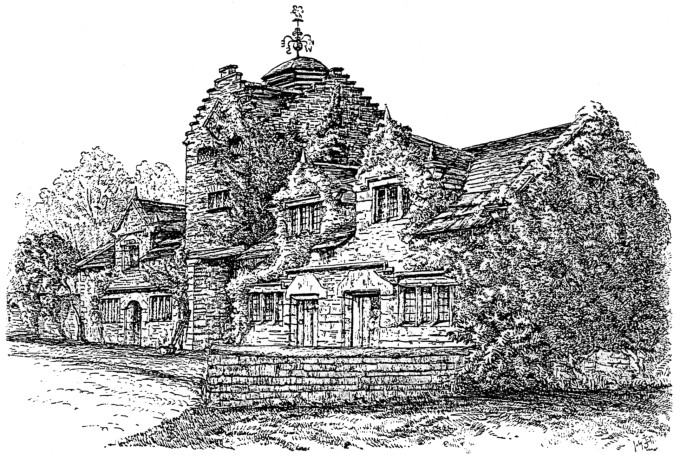 In the back part of the Hall, on the ground-floor, is a room with oak panelling, and having the Bradshawe arms carved in stone over the fireplace. The stables, barns, and outbuildings, which stand a little apart from the Hall, are very picturesque, and bear the initials, and date of the builders, Henry and Elizabeth Bradshawe, HBE 1669. They are very extensive, and are still in a good state of preservation. The front of the stables, with the central gable over the doorway, is shown in the illustration on p. 48.