The following members took part in a long route from Hope to Hayfield.

The earliest train from Marple to Hope now leaves at 10.00hrs thus making our arrival at Hope rather late - around 11.00hrs. On arrival at Hope we walked by road into the village for shopping, instead of going by path across the fields. We had some delay in Hope village before setting out along the lane, across some paths, and on to the Roman Road.

The weather at this time was hot and sunny with largely clear sky - so warm that we tended to remove clothing.

Beyond Hope Cross we left the Roman Road to cross open country toward Mad Woman Rocks and Blackden Edge. Before the final climb we stopped for lunch for a time, then made the final ascent to the rocks where we had another break to rest and admire the view, particularly eastwards over Ladybower Reservoir. 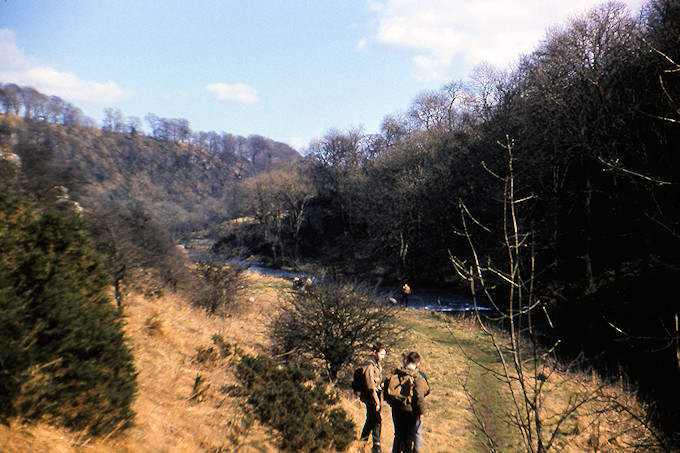 Then we set off again along Blackden Edge towards the rocks at Blackden Head and Seal Edge. Owing to the several weeks with little or no rain the peat was dry (almost dusty) and all the streams were devoid of water.

Soon those who'd brought little, or in cases no drink were complaining of thirstiness. Not until we reached Blackden Head did we find any water, and even then it involved a descent of a hundred feet or more into the Clough. By this time visibility had deteriorated somewhat and a slightly chill wind had sprung up - we were, of course, at around 2,000 ft.

From Blackden Head we put on speed a little, finding we were a little short of time for the 5.15pm train. There was little of excitement over the remainder of the route; Tony left us to hurry on so as to get home in time to rescue dinner.

Eventually, without trouble, the rocks above the Snake Path were reached and we dropped down to William Clough. A few people (Graham Hutchinson and Andrew Howie) rushed on ahead - most of them waited at Nab Brow, but the two named ones pushed on and were not seen again until we boarded the 7.13 train at Hayfield.

On most of the route few people were seen. When we reached Nab Brow a large party were observed descending from Sandy Heys. Quite a number of school children were not well shod, but in the weather of the day this did not seem of vital importance. Did see two pairs of walkers on Seal Edge, wearing shorts but well shod.

Wind was NW about Force 3 in the afternoon, rather less earlier on. Generally it was felt that the route was too long - not that it was difficult, simply that it did not allow time for messing about on all the interesting rocks that we came across.