Extracted from exercise books I & II these reports run from 7th December 1957 until 19th May 1959, when the account stops, literally mid-word. The rambles clearly continued as photographs were still being taken in 1960 but there have been no written records found. Photographs from other walks are used to break up the text where none can be identified for a specific walk. 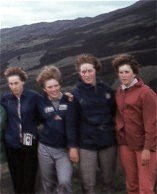 A route was planned from Edale over Kinder Scout to the Downfall and then to Carr Meadow, through Rowarth to Mellor. The morning was very wet and only Michael Smart was at the station to accompany Tony (Mason) and myself. Due to weather it was intended to cancel the outing but as Michael and Tony were keen to go the three of us ‘trained' to Edale and started the walk.

Weather was very bad with driving icy rain and a bitterly cold wind. In view of the weather the plan to cross Kinder Scout was forsaken, and the easier walk over Jacob's Ladder towards Hayfield taken. 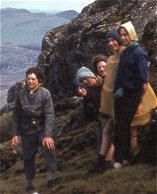 The route was from school along the canal bank to Lyme Park, over to Bow Stones, to Kettleshulme, and cross country to Taxal and Whaley Bridge via the reservoir path.

Contrary to weather forecasts, the weather was bright and sunny and good progress was made. Two herds of deer were seen in Lyme Park. A lunch halt was made at Bow Stones and a further short stop for refreshments in Kettleshulme.

Owing to heavy snow the ramble planned for this day was cancelled but, as Vivien Brooks, Margaret Andrews, Eileen Thelwell and Pauline Niblock arrived at the rendezvous, they were taken for a car ride (with Tony Mason) to Winnats Pass, where a little walking was done - it was bitterly cold. 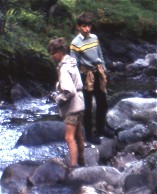 Despite a poor weather forecast, a large number (38) of children turned out to attempt a route from Hayfield, over Mount Famine and South Head to Brown Knoll, passing the Edale Track near Jacob's Ladder, over Kinder Low to the Downfall, thence down to Kinder Reservoir, over Middle Moor to Carr Meadow, Rowarth and Mellor.

The walk started well in fine weather but with much snow lying on the higher ground. Between South Head and Jacob's Ladder, Pauline Wilkinson became ill and was taken home by the shortest route by Mrs Mason and Monica Wild. The remainder of the party continued in the sole care of Mr Mason.

For this walk a route was planned directly over Kinder Scout from Edale Station to Kinder Downfall, and home via Kinder Reservoir, Carr Meadow and Rowarth. Again the party was large, numbering 36 children and three leaders. Weather was poor with intermittent rain - high ground was cloud covered.

A way was taken up Grindsbrook to Kinder Plateau and the spot height of 2062 ft. At this place visibility was about 50 - 100 yards. A gathering was made at the spot height, but a number of impatient boys and girls, headed by Frank Kirk and Eric Knott, apparently feeling that they knew all about the matter, forged ahead and were promptly lost. 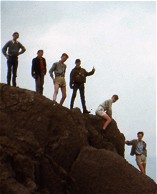 The same route was chosen for this expedition as for the previous one - the hope being that the weather would be kind and allow the wide views to be enjoyed. Again the party exceeded 30 children, and was led by Mr and Mrs Mason and Miss Wood.

A slight change was made in the approach to the Kinder plateau enabling much of the worst peat bog to be avoided, and also giving a more interesting ramble to the top.