The party boarded an early train for Bakewell from Marple; arrived Bakewell before 9 o'clock. It seemed that we had a good long day ahead of us and ample time to cover our 19 - 20 miles.

The leader bought a new pipe in Bakewell - he's poor company without his pipe.

Climbed the field path towards Over Haddon - missed the last stile and climbed over the wall at the corner of the field where it was broken by many others who'd made the same mistake. The farmer, passing in his car, had some comment to make - justifiable. We rebuilt the wall as penance - hope the farmer saw our work. 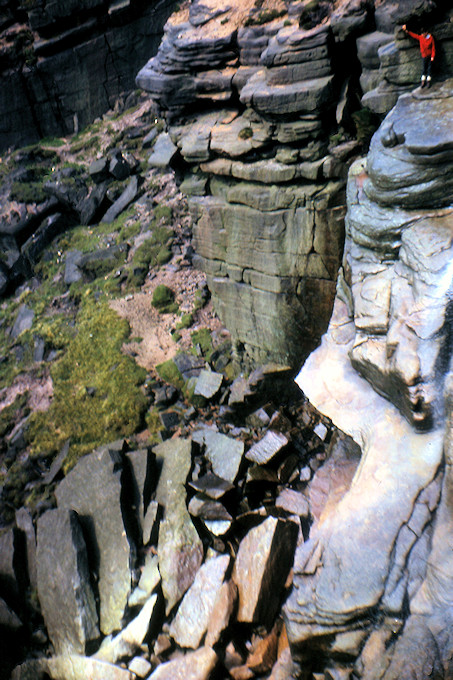 We dropped through thick head-high nettles into Lathkill Dale. Lots of sunshine and colour in the dale - it was high summer. One of the boys succeeded in catching two sleepy trout by hand; both were returned to the stream. We loitered in Lathkill Dale until reminded that we had near on twenty miles to cover by 5.30pm.

We pushed on passed Monyash and turned to descend the gentle slope of Dimn Dale. During the passage of Dimn Dale the sky became cloudy and there was some thunder but, apart from a few drops of rain, we escaped. Reached the foot of Dimn Dale, had a short break at the main-road crossing, and then continued through Monsal Dale. As usual when in Monsal Dale we had a stop for a play around at the weir, before continuing to Millers Dale.

By Millers Dale bend we had gained sufficient time to loiter a little, and had some fun messing about in and by the river. A few lads missed the way at the turn through the mill yard; Tony and Roy dashed after them, and all were rounded up before Millers Dale Station was reached.

The train was ‘caught' this time - no two hour wait.