These drawings depict the modern intervention agreed on the Iron Bridge in Brabyns Park as part of the restoration project completed in 2008. There are three key elements;

These last two requirements have been achieved by the inclusion of a steel hollow box section (SHS) at each side that will house the gas main and other smaller services and support the new parapets. 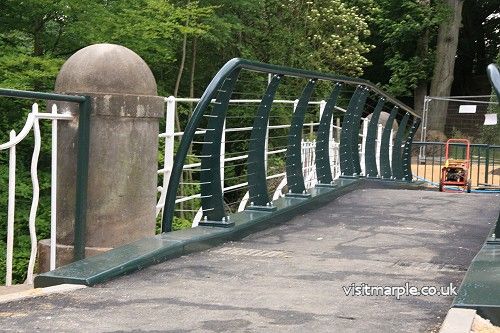 The modern intervention is clear to see in this photograph

We would have preferred not to include as much modern intervention as we are doing, however, this has been agreed over an extended period of development during the project planning phase with input from all stakeholders, including English Heritage.

The scheme has received Listed Building Consent and we believe it is the best compromise possible to ensure the bridge is retained for the enjoyment of future generations.

Hopes for the future

Key requirements for the Conservation Officer and ourselves have been to avoid cutting and retain as much of the original fabric of the bridge as possible and to keep the modern handrails as low as possible in relation to the stone domes at each corner of the bridge. These drivers have contributed to the length of time it has taken to find solutions but have been successfully achieved. This means that in the future, perhaps with technological improvement or an enlightened approach to safety standards, or a combination of both, the modern intervention could all be removed and the old bridge will be revealed intact underneath, ready for more sympathetic treatment. 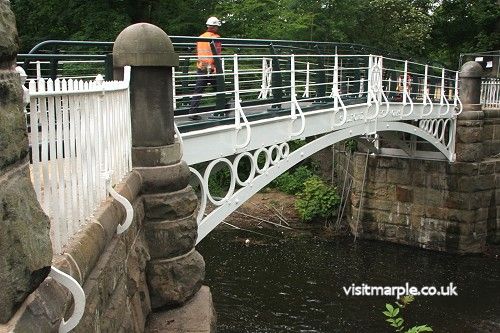 We're much happier with how it looks from the sides!

The following images are captured from the drawings. If you click on the titles or the images themselves the pdf versions of the drawings will open in a new window.

This drawing shows the replacement horizontal and new diagonal bracing that will strengthen the central arched rib. The new bracing will be installed at the same locations as the existing tie rods, which have corroded beyond repair. It also shows the SHS housing the gas main on one side and smaller services on the other and supporting the new parapets. 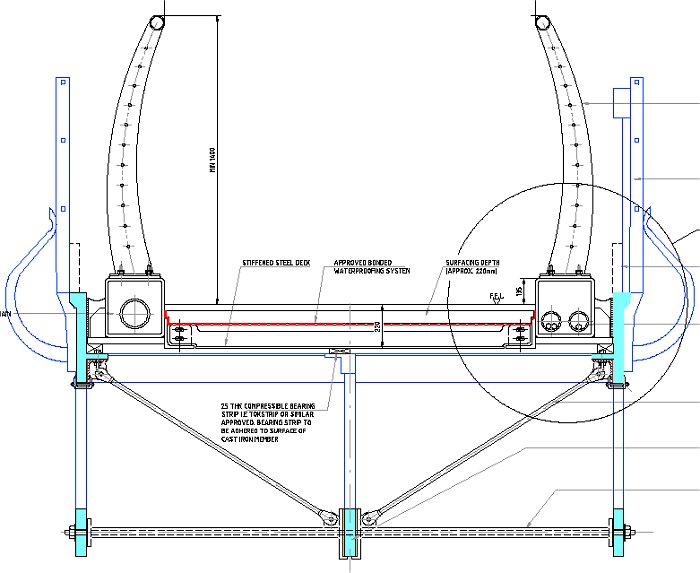 This drawing includes an external elevation on the bridge, showing the original parapets with the new parapets behind. The new parapets will mimic the spacing of the originals and follow the same profile to ensure they remain as unobtrusive as possible, especially when viewed from the river bank.

It also includes a cross section (seen from on the bridge) that shows the modern parapets with the old ones behind, and several other details of the SHS where it passes over the abutments.

This drawing shows the details of the new steel deck and the SHS (steel hollow box section) that will rest on the original cast iron beams and on the abutments. A steel deck has been chosen in order to minimise the deck thickness and keep the new parapets as low as possible in relation to the stone domes. The gas main will be diverted though one of the SHS's, which also enables to deck thickness to be kept to a minimum.

If you have any queries on the drawings we will be happy to try and answer them.