The following members joined the party at the school gates or at Marple Bridge:

Leaving school at about 9.40am, we arrived at Torside a little after 10 o'clock and set off up Torside Clough. The high path was followed for a while in order to view the massive crags on the right-hand side of the clough - but we dropped down to the lower path in order to clamber up the narrow rocky gorge.

Progress was rather slow, partly because of the size of the party and partly because there were a fair number of beginners with us who needed a helping hand over some of the difficult parts. A stop was made for lunch, near to (John Track) Well, for about half an hour. The weather had improved by this time and we seemed well set for a pleasant day.

Shortly after we restarted it was reported that ‘Judy' had hurt her leg. On investigation it was found that a fair size boulder had rolled onto Judith Raynor's leg. There was no sign of fracture, but the leg seemed to be giving some pain. The spot where Judith was, was difficult and, knowing there to be a reasonable path some forty or fifty feet above, the leader scrambled up the steep slope with Judie on his back. There would have been easier ways, but this sort of escapade raises a laugh and improves spirits. 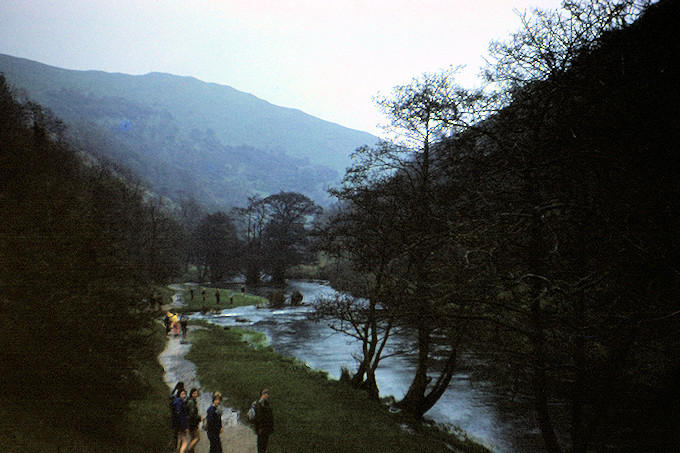 On the path we were able to progress, albeit slowly, with two people helping Judie. Progress was very slow and Andrew Mason and Bill Grundy were instructed to take all who wished at a better speed across the moor to Yellowslacks Clough; about half to two-thirds went with Bill and Andrew.

The rest of us struggled on with Judie, sometimes supporting her one on each side, sometimes two carrying her, sometimes a pick-a-back, usually by the leader over the more difficult part. Eventually, after several rests, we came to Yellowslacks, just above the waterfall. This entails a difficult crossing, especially the steep ascent up the far side. However, with the help of many willing hands, and much heaving, pulling and laughing, it was accomplished. Then along the well-marked path to Shelf Benches, with some exploration of odd places on the way.

When we arrived at Shelf Benches the leading party had been there some while and were ready to push on - this they did, taking the low path. The slow party took the route along the ridge. Later, those at the lower level, thinking they were going the wrong way, scrambled up the side to join the leader. This was a bit hair-raising as the climb was steep and had much loose rock and gravel near the top. Assistance and guidance was given by the leader, several senior members, and another rambler who we'd met on a previous expedition.

From Shelf Benches we dropped down, via Spring Cabin, and so to the main track into Glossop. Judith survived all this like a good sport, and when we got onto the smoother, better track was able to walk reasonably without assistance.

We all arrived at Glossop safe and sound. Although this expedition did not go as planned, I think it was generally enjoyed. It is hoped to visit Shelf Benches again soon, and also to take a working party to tidy up Spring Cabin. The party was, of course, too large, but this is usual when we hire a bus.

Warden report has been submitted.