At about 8.40am the following group set off from School to Malham by Cooke's bus.

Made good time on the outward run, arriving at Malham by about 11.00am. Weather was cloudy but dry - cloud was low, below hill top level in many places.

After the usual delays when we start from a village (ie buying sweets, drinks, etc,) we set off along the lane towards Gordale Scar. On reaching the meadows we noticed a fair amount of water in the streams; also as we approached the gorge we were impressed by the dramatic appearance of the great limestone gorge with low clouds swirling about the upper part of the towering cliffs. 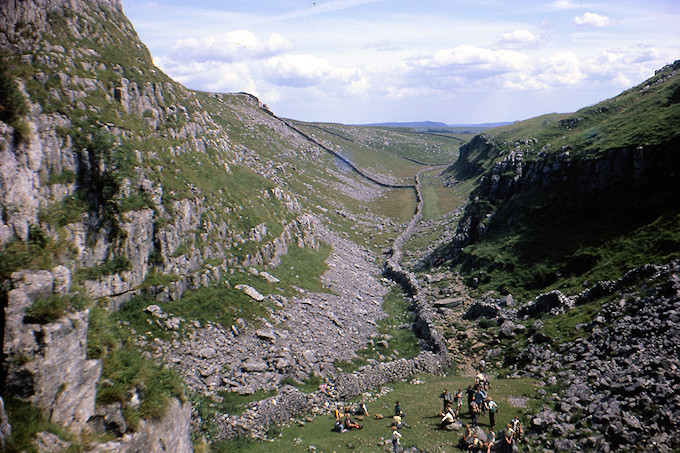 There was more water than usual coming over the fall and our normal scramble was unpractical for most of the group - for practice Tony M made several ascents and descents by various routes. Some film was exposed on this section but, owing to the dull conditions, success is a little doubtful.

After the steep scramble to the top of the falls we sat on the edge of the gorge for lunch, and afterwards had a scramble around, exploring the rocks and the inside of the hole where the water pours out. All our newcomers were thrilled by all this exciting rock.

Afterwards we walked on gently up the stream and across the fields and road towards Malham Tarn - we did not stay around the tarn. Leaving the road we headed across the fields towards the Sink Holes - on the way one of the boys found a purse containing money and sundry odds and ends.

There was a lot of water in the stream but it was all swallowed up in the final sink hole. It was a little disappointing to find that the large open hole has been filled in with rubble. 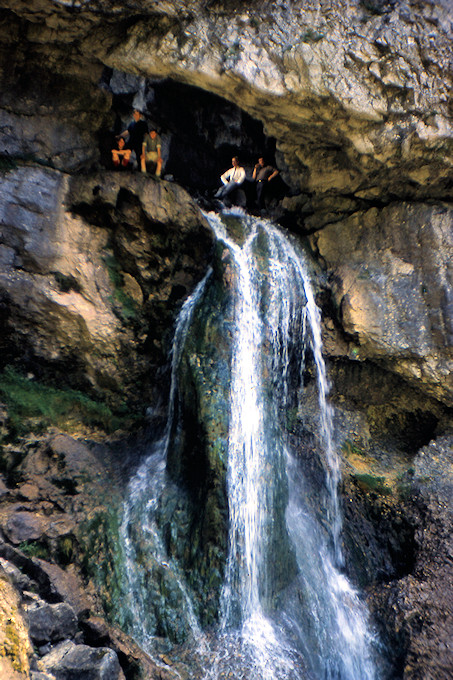 Pressing on we came to the ‘dry fall' and scrambled down to the valley - no one descended by the fall. It was wet and Tony agreed that it was inadvisable. We dallied here for some time discussing the height of the cliff; it was finally measured with the aid of Julian's rope and found to be about 65ft.

Then along the valley toward the great overhanging lip of Malham Cove. Here another break while we ate sandwiches and scrambled around before dividing into two groups to make the descent down both sides of the valley. At the foot of the towering cliff we stopped again to explore and examine where the stream flows from under the cliff, then walked on gently to arrive back at Malham village at about 5.15.

After ices, drinks, etc we boarded the bus and set course for Marple at about 5.40pm. After a pleasant ride we arrived in Marple a little after 8 o'clock - a pleasant and successful day.