The place-name Chadkirk means 'the church of Chad' and local legend has it that Chadkirk Chapel occupies the site of an ancient monastic cell of St. Chad, dating as far back as the 7th Century. The Chad in question was a cleric who played a prominent role in the conversion of the Mercians to Christianity and was, from 669 to his death in 672, bishop of the Mercian diocese of Lichfield. After his death Chad was elevated to the position of patron saint of Lichfield. 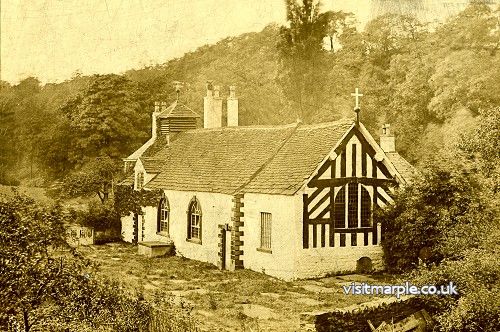 Old documentation implies that there was a church on this spot in the early 14th Century and amongst the earliest occurrences of the place-name is a reference to William de Chadkirk in 1340. The chapel itself is first explicitly mentioned in 1535, which is around the same period to which the oldest parts of the chapel have been dated. Archaeological excavation to the interior of the chapel in 1994 did not reveal any evidence of a building earlier than this, although it cannot be discounted due to the extent of ground disturbance that has occurred over the passing centuries. Also, being limited to the interior, this excavation would not have revealed the foundations of another structure even just a few feet away from the existing building.

Why the chapel was sited in this location is not certain but it could be that the presence of the nearby well, known as St. Chad's or Holy Well and fed by a natural spring had some influence on this. The existing well-housing is quite recent and was probably built in the 18th or 19th Century but it's possible it was also a much earlier site of pagan worship that was later Christianised, as is often the case with wells elsewhere. It's equally possible that the site was chosen due to the nearby ford across the river Goyt at Chadkirk or the proximity of an early bridge across the river at Otterspool, which is know to have been in existence by the end of the 13th Century. 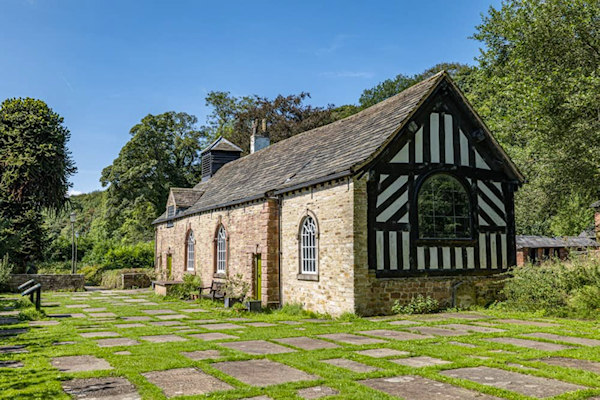 Present day photo of the chapel courtesy of Friends of Chadkirk

Chadkirk was part of the estates in Romiley and Bredbury owned by the Davenport family after they acquired them from the Lords of Stockport in the 14th century. Since these times the fortunes of the chapel have fluctuated between neglect and reconstruction several times. The present building was originally of an all timber-framed construction on a stone plinth. Today this framing only survives in the north and east walls of the chancel, the others being reconstructed from stone in around 1747.

The chapel is now owned by Stockport Council and was extensively restored and refitted again during the 1990's. Later, in 1999, the finishing touch was completed when new stained glass fitted to the East Window was unveiled on July 18 by The Mayor of Stockport, Councillor Maureen Rowles. The window, designed by artist Kate Davis in consultation with local community groups, was constructed by Ian Hartless using unconventional modern techniques. However, this never quite fitted its historic setting and the glass in the East Window was replaced again in 2013 with a much more traditional design featuring a Saxon cross that was commissioned by the Friends of Chadkirk. 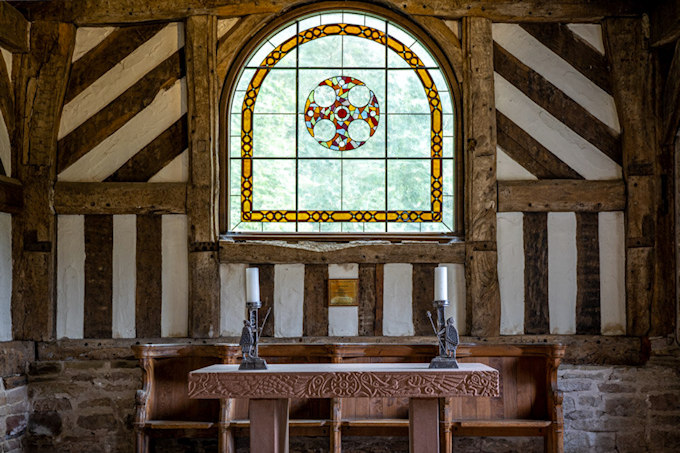 The new East Window courtesy of Friends of Chadkirk

Other notable modern additions to the chapel include a sandstone sculpture of St. Chad, a carved oak gallery front and metal worked crucifix and candle holders.

Since completing the chapel restoration work moved on to the Victorian walled garden, which has been superbly restored and is now maintained by the Friends of Chadkirk, a community group formed with Chadkirk's interests at heart. 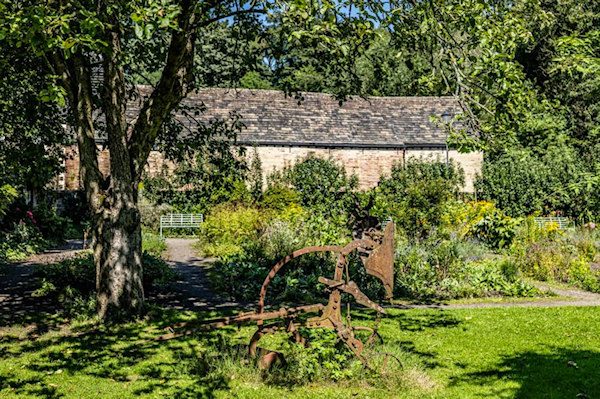 Inside the walled garden, courtesy of Friends of Chadkirk

For many years following its restoration the chapel was open to the public on Saturday and Sunday afternoons but at present it is only used as a wedding venue by Stockport Council and opened infrequently by the Friends of Chadkirk whenever they can. The Covid19 pandemic has disrupted everything of course but the group is hoping to get a more regular programme of opening in place. In the meantime, the building is available for non-profit making use by arrangement with the Friends Group and contact should be made via their own web site to find out more.

The Chadkirk Estate itself, including the walled garden, is open 7 days a week.

For several years following the restoration Chadkirk was the scene of a weekend long festival, a summer celebration of music and entertainment. This usually included daytime and evening events spanning from Friday through to Sunday evening. Evening attractions at previous Chadkirk Festivals have included a Jazz Night with the Gershwin Gang and Andy Mackenzie's Jazz Allstars on Fridays and Saturdays and Sunday nights have featured the 'Renaissance' the ecumenical choral ensemble. 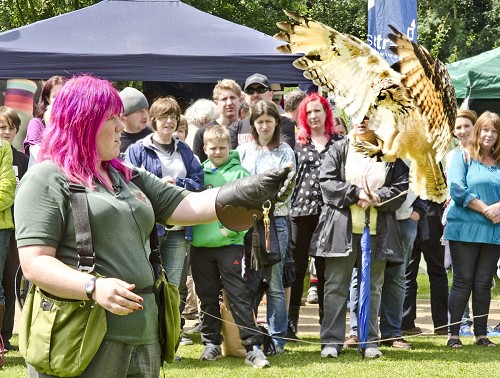 Falconry at the 2012 Chadkirk Festival by Arthur Procter 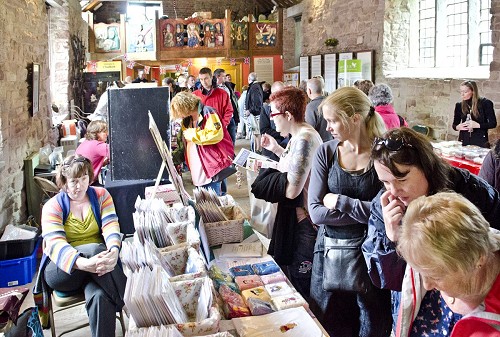 Inside the chapel during the 2012 Chadkirk Festival by Arthur Procter

The Friends of Chadkirk do hope to bring the festival back to life in the future, perhaps in the form of a village fete to celebrate the annual well dressing.

Well dressing is the ancient Derbyshire custom of decorating springs and wells with images made up of living materials such as petals, leaves, bark and stone. This age old tradition has been honoured at Chadkirk since 1998 and every year it gets better and better. 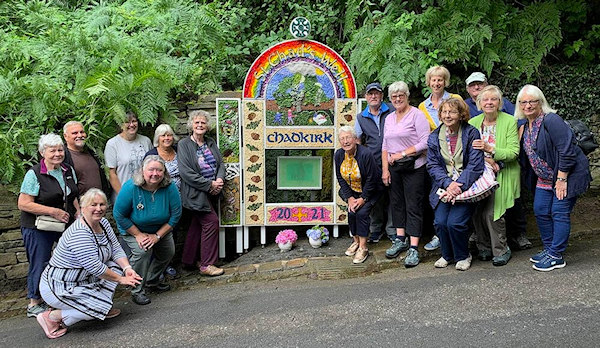 Some of the Friends during the 2021 Well Dressing, courtesy of Friends of Chadkirk

For future events and latest details visit the Friends of Chadkirk at https://chadkirkchapel.org/