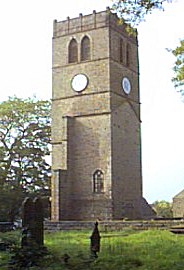 The eight bells of All Saints' Church, Marple, are located in a free standing tower, some 70 metres from the main church.

The bells were originally cast in 1731, by Abraham Rudhall of Gloucester, as a ring of six bells, and installed in the Parish Church of St. Mary's in Stockport. The bells remained there until 1809 when, as a result of the instability of St. Mary's bell tower, they were removed and placed in storage.

By 1816 a new tower had been built at St. Mary's, and a new peal of eight bells installed. The original six Rudhall bells were purchased by the townsfolk of Marple and installed in the tower at All Saints Church. They were rung for the first time on 30 June 1816.

The tower was not always a free standing structure. It was originally part of a Georgian chapel, first used in 1811. By the late 19th century there was a need to increase the space for local worship, and plans were drawn up to extend the Georgian chapel. Unfortunately it was found that the structure would not stand up to the alterations required, and the decision was taken to build a new church alongside the old. The new church was completed and consecrated in 1880 and, although a bell tower had been included in the plans, to save costs it was never constructed and the bells remained in the old chapel.

Eventually the old chapel lost its appeal as a place of worship and was used only occasionally for services. Gradually it fell into a state of serious dilapidation.

In 1964 it was decided to demolish the old Georgian chapel, but to leave the tower standing. Evidence of the chapel can be seen at the sides and to the rear of the remaining tower.

In order to make the tower safe for bell ringing, the bells were lowered down the tower, and a new ringing chamber established on the ground floor. At the same time, two new lighter bells were cast by Taylors of Loughborough, and added to the existing six bells.

The result was a fine ring of eight bells, with a tenor (the heaviest), weighing in at a very manageable 14cwt. 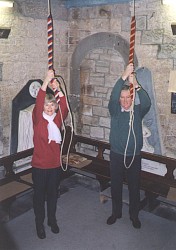 The tower is affiliated to the East Cheshire Branch of the Chester Diocesan Guild of Church Bell Ringers (C.D.G.), and all permanent ringers at All Saints' are elected as members of the Guild.

Visitors are always given a friendly welcome at the tower, whether ringers or not. The bells are rung on Sunday mornings from 9.45 am to 10.15 am, and practice night is each Monday from 7.45 pm to 9.00 pm. Practice may be cancelled on some holiday weekends, it is always better to check first to avoid disappointment.

New recruits to the art of campanology are always needed, and should anyone wish to try their hand, please contact the Tower Secretary, Pamela Andrew on 0161 427 4094.

Bell-ringing is a very healthy pastime, all that is needed is a little bit of brawn, a little bit of brain, and a desire to join a thriving world-wide hobby, which can give many hours of pleasure, and where you will meet people from all walks of life, and of all ages.

If you are interested, give it a try, you won't be disappointed!