Marple's Grand Aqueduct was completed in 1800

On the "Narrows" side of the Aqueduct a footpath on the right descends towards the River Goyt below and passes under the Aqueduct in the direction of Watermeetings Farm. A sign next to the footpath here once spelled "Aquiduct" with an i but that is long gone and now replaced by a new kissing gate installed as part of the improvements made by the Oldknow Legacy Project. 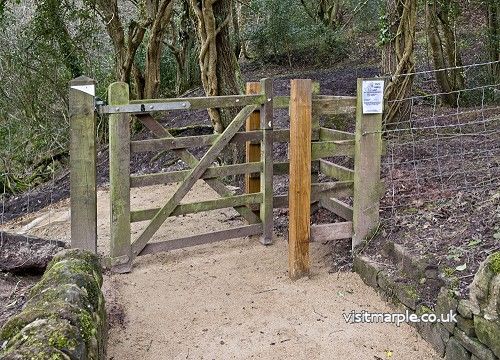 Take the footpath through this Kissing Gate to see Marple Aqueduct up close.

For a long time the Aqueduct could only be viewed in the winter and even then it was unsatisfactory, with so many trees obscuring the vista of this magnificent structure. Thankfully, following the excellent work of the Oldknow Legacy Project to protect and reveal Marple's fantastic heritage, that has now all changed. Today views of the Aqueduct and Viaduct are comparable to those wonderful postcards of Victorian and Edwardian times. 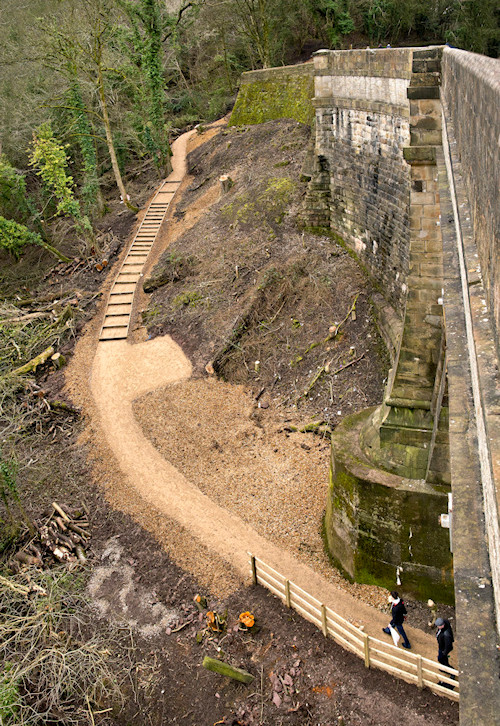 The footpath passing under the Aqueduct to Watermeetings Farm. 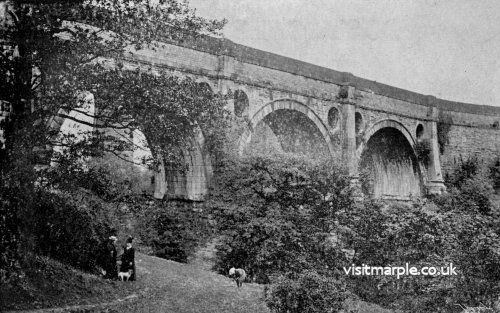 Above and below, the Aqueduct as it looked around 100 years ago. 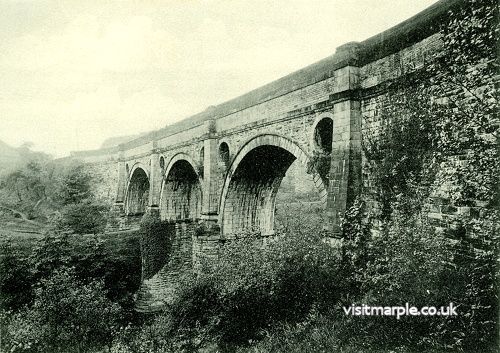 The year 2000 was the Aqueduct's Bi-centenary, although for a time during the 1960s it seemed likely that this anniversary would never be achieved. Now a listed structure and a scheduled ancient monument, it was due to be commemorated with the erection of a blue plaque in the millennium year; however, this was delayed until 2010. Since then it has also been recognised with the installation of a National Red Wheel commemorative plaque unveiled on 21 June 2016 by President of the Transport Trust, the Right Hon. Sir William McAlpine and Canal & River Trust’s Chief Executive, Richard Parry. 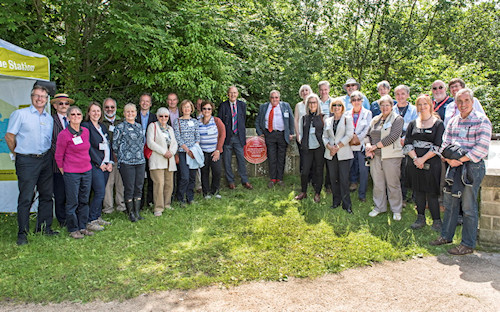 The black and white photo below shows the aqueduct repairs underway in the 1960s. In April 2003 a memorial to Dr. Cyril Boucher was erected alongside the Aqueduct. Dr. Boucher played a key role in the restoration of Marple Locks and Aqueduct and the memorial is a fitting tribute to his efforts. 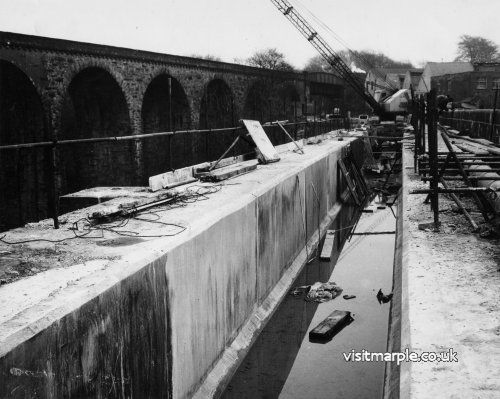 Aqueduct repairs underway in the 1960s.

When canal boats were still pulled by horses times and attitudes were much harder than they are today. It was unlikely that an old horse would be put out to grass for its final years and they frequently died "in harness". To avoid the cost of paying the knacker to dispose of the bodies they were usually buried by their owners in a convenient spot. The woods below the Aqueduct was one such location and became a regular graveyard for these unfortunate animals.

A considerable number of horses were buried here over the years but they are not there any longer. When the bones were later discovered by other boatmen, ever-wise to a way of making some extra cash, they dug them up and sold them to the old bone mill near Strines Printworks. 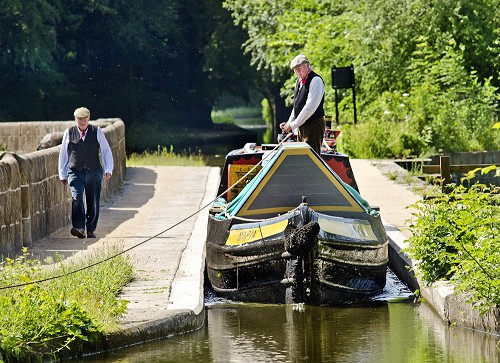 There are four alcoves on the towpath side of the Aqueduct. These were included to provide pedestrians with places to stand and allow the horses that pulled the boats to pass.

The channel of the Aqueduct was only made wide enough for one-way traffic to keep construction costs to a minimum. At the Marple end it opens out to accommodate two-way traffic before then passing under the railway Viaduct.