Did you know that Marple has its very own Miniature Railway! 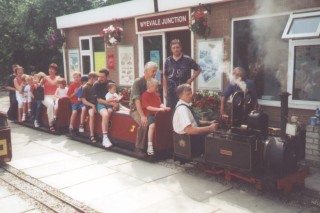 The original track, referred to officially as a "balloon loop" in the Ian Allan abc "Miniature Railways" handbook, was virtually completed in just five months, from August to December 1998. During 2000/2001 a major extension was undertaken, increasing the track length to approximately 1 mile. This was opened during Easter 2001. 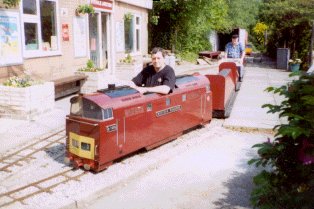 Work on an ambitious track extension was carried out during 2000 and the early part of 2001. This project has extended the line into what is termed a "dumb-bell" formation, (although technically this is an incorrect and inappropriate term!).

Trains now run from Wyevale Junction, through an area with attractions for younger children. After crossing a pathway the line then runs adjacent to the car park, through a small cutting, then, following a loop, the line returns adjacent to the roadway and past the station onto the new extension. This takes the line through a tree-lined area by the river, over a girder-bridge and onto an embankment which then carries the line on a large "balloon loop", eventually rejoining the original track at a point adjacent to the engine shed before returning to the station.