Early in 2010 Craig Wright, David Sumner and Tom Lord met on Craig's initiative to discuss Rose Hill Station, its train service, station facilities and environment. Craig knew how to contact Northern Rail and GMPTE (now TfGM) and as a local councillor and railway enthusiast (ask him about the North Staffordshire Railway) he offered to act as Secretary of a new organisation. Tom is also a rail enthusiast (he has driven public steam hauled trains in Poland). David previously travelled the Rose Hill Line to Manchester daily, and was also an enthusiast who organised the 150th anniversary celebrations of the Liverpool to Manchester Railway in Manchester in 1980. So on 29th June 2010 at the Railway Hotel in Rose Hill Friends of Rose Hill Station was formed with 39 members. 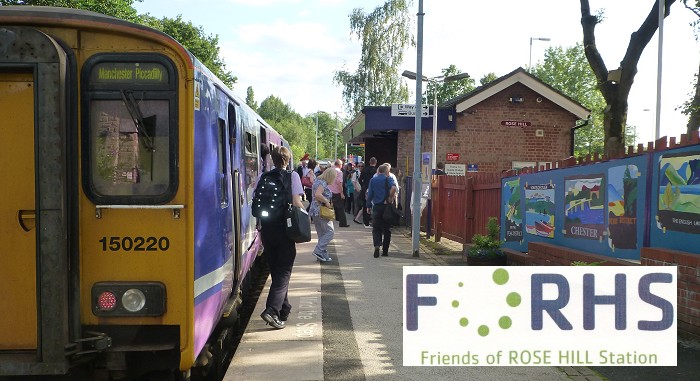 Since then we have held regular meetings at the Railway and discussed with Northern Rail and TfGM how we can improve the Station, its service and surroundings. You may have seen us at work on the station on Sundays. We have a hard core band of eight volunteers who meet monthly (usually) at 10.00am on a Sunday and would welcome more support. We have, by courtesy of Northern Rail, access to the waiting room and storeroom for our tools and equipment. Rose Hill offers easy disabled access from the carpark and from the road at Rose Hill. The booking office is partly manned by Tony Tweedie, the present stationmaster, who is very helpful and also helps keep the platform clean and litter free.

As well as improving the environment and making the station welcoming - look at the paintings by Rose Hill Primary School in the waiting room - we want to see an extended service to include late night trains and a Sunday service. The bigger our voice the more we will see a better service. Join us!

Look out for more art work appearing at the station and its surrounds soon.

And we are developing the station as a venue for community events. Did you come to the Marie Curie coffee morning we hosted in 2017? Look out for it next time.

We also hosted the Stockport for Peace exhibition in our waiting room.

Talk to us if YOU have an event or exhibition you would like to use the station area.